Preventing HIV transmission one circumcision at a time 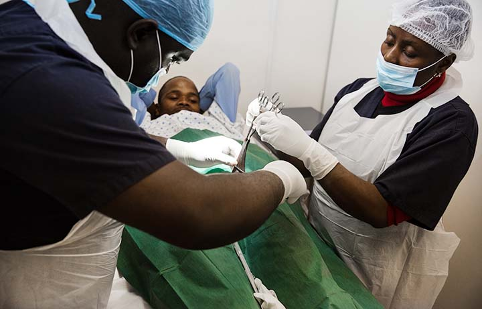 Studies have shown that circumcision has an effect on the type of bacteria that lives on the penis.  This would explain why men who have been circumcised have a 50%-60% reduced risk of being infected with the HIV virus (the virus that causes Aids).

Researchers have also found that there is a lower risk for men who are circumcised to be infected with other sexually transmitted diseases such as herpes simplex virus type 2 and papillomavirus.

The research was however not done of the virus itself but rather on the bacteria that lives on the penis.

The study was conducted in the following manner:

The researchers assessed the quantity of bacteria as well as how many different types of bacteria that live on the penis before and then again after circumcision had taken place.

Price also says that the exact way in which these bacteria living on the penis may affect the risk of getting HIV infection is not yet known, but in previous studies done it was suggested that these bacteria may influence how vulnerable the penis will be to sexually transmitted viral infections.

If the penis is uncircumcised, a higher quantity of bacteria my activate the Langerhans cells present in the foreskin, preventing the cells from doing what they normally do which is fighting off viruses. Instead the activated Langerhans cells can actually help the HIV infect the immune system.

By having the penis circumcised, and thereby reducing the quantity of the bacteria present on the penis, it could prevent the Langerhans cells from doing this.

Price says that this research could lead to alternative circumcisions that would not include surgery, whereby altering the bacterial community present on the penis and therefore reduce the risk of HIV infection.

Male circumcision is not a silver bullet that will protect you from HIV, it is one of the preventative measures that make it less likely that you will contract HIV.

Use of condoms, both male and female condoms are recommended, regular testing, and general safe sex practices all form part of a more comprehensive HIV prevention strategy.

Prventing the spread of HIV is of course the most important thing for all people but with infection numbers at current levels and those living with HIV and Aids at record levels, we must of course continue to find a cure for HIV.